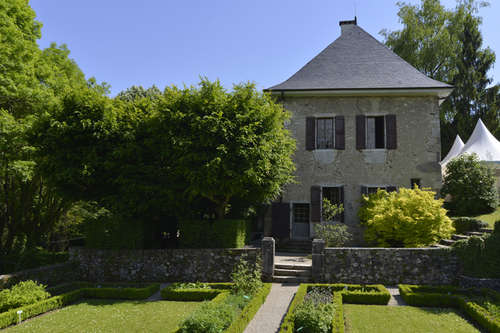 "A lonely house on a valley slope was our place of refuge, and it is there that in the space of four or five years I enjoyed a century of life and a pure and complete hapiness..."

Jean-Jacques Rousseau (1712-1779), a philosopher, writer and musician, often referred to as one of the fathers of the French Revolution through his famous Social Contract, describes Les Charmettes as the place where « began the short happiness of [his] life ».

The sixteen-year-old Jean-Jacques Rousseau met Madame de Warens in Annecy in 1728. She will quickly become his benefactress and will definitely leave her mark on the young man giving him an education and becoming his mistress.

His stay at Les Charmettes was at the same time years of simple pleasures, days devoted to his passions in a place where he viewed himself as « free » and where he built up the essential humus for his work, his « stock of ideas ». Indeed Jean-Jacques Rousseau created his own method of work, a pure learning phase giving way to his critical mind and writing.

He will be revealed worldwide a few years later thanks to Emile, or On Education, the Social Contract, his Confessions or Discourse on the Origin and Basis of Inequality Among Men.

Jean-Jacques Rousseau stayed at Les Charmettes with Madame de Warens between 1736 and 1742. There, he discovered the pleasures of nature, played music, one of his passions and carried on with his academic and sentimental education with « Maman ».

After the French revolution and Rousseau's death, les Charmettes became a place of pilgrimage for all the writer's admirers. At the beginning of the XIXth century, the owner Georges-Marie Raymond, who was to become the curator of the Fine Arts Museum of Chambéry, consequently decided to open the house to the visitors. George Sand, Lamartine, Byron and thousands of others came from all over the world to see where this revolutionary philosopher had lived, laying their thoughts in the visitors' book Georges-Marie Raymond had had the splendid idea to propose, an opportunity still offered to the modern visitor.

Today, this remarkably well-preserved house, labelled « Maison des Illustres » still bears Rousseau's presence and personality. Les Charmettes still conforms much to Rousseau’s depiction of it in his Confessions, “in front was a terraced garden; above it a vineyard, below it an orchard, facing it was a little chestnut plantation, close by was a spring, and higher up the mountain were meadows for grazing cattle.” It appears as a nest in the rising hills of Chambéry, retaining its bucolic atmosphere and offering a spectacular view onto the city and the surrounding mountains.

It is easy to believe in Rousseau’s perception of Les Charmettes that « in this spot true happiness and innocence dwell. If we do not find both of them here, it will be no good looking for them anywhere else. »